I held the map out in front of me and looked around for street signs that may point us in the right direction. My eyes searched for any semblance of English writing. Nothing.

And yet, I just refused to accept that we were lost.

It’s really my fault that we ended up here. We had all set out from our guest house, situated in Thamel, the tourist base of Kathmandu. With a map and minds full of confidence, we four young ladies set out for the Garden of Dreams. On our acclimation tour earlier that day, our coordinator had pointed the way and it sounded pretty easy.
A straight shot.
You couldn’t miss it.
Now we were at that same point where he had pointed and it turned out that this was not *entirely* the case.

You must know that in Kathmandu the roads are not entirely on a grid-system like many cities in the United States. One road can have many turns involved and that straight-shot to the Garden was not so straight after all. 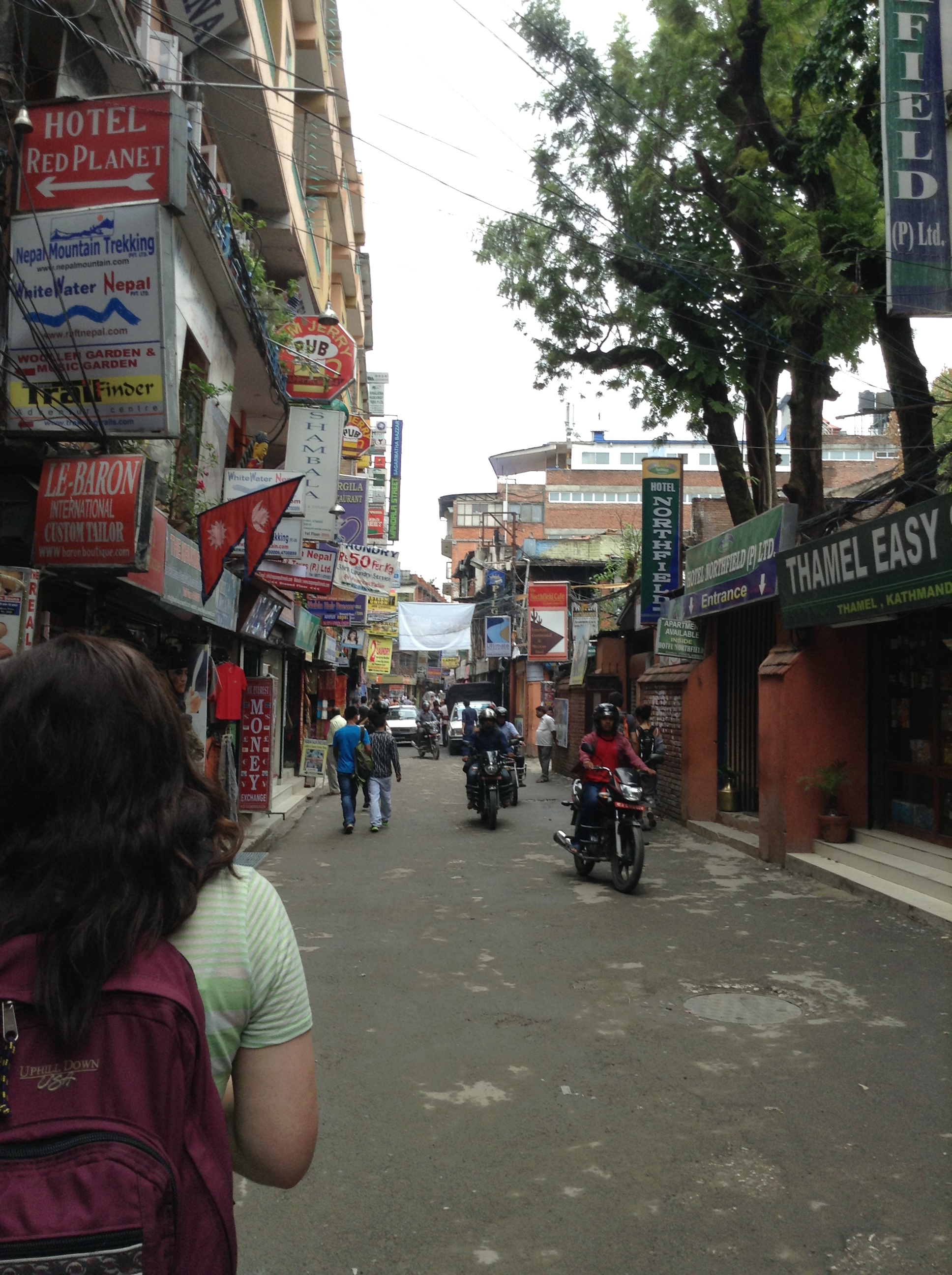 We stopped at the first crook in the road and consulted the map. We all looked over it and briefly discussed our plan of action.

A man walking by, stopped and joined our group: “What are you looking for?”

We told him and he pointed down the road we were standing on. It didn’t seem quite what our coordinator had earlier stated so I questioned him: “You just go straight down this road, and we’ll find the Garden of Dreams?”

“Yes! Come, I will take you there.” he replied with a smile and a wave of his hand.

I shrugged and looked at my companions for approval. They all shrugged back and we were on our way.

As we walked, we learned that this guy was from India and had moved to Nepal for a job. Along the way, he pointed out different Hindu gods and shrines within the walls of the city. He asked us if we wanted to see a temple, and without consulting my friends, I excitedly agreed. Probably not the best move while traveling in a group…

He led us down a small alley and through a doorway which led to an open square with a beautiful temple in the middle. I wish I could remember all the information he shared with us about this particular temple. I want to say it had something to do with fish?

He blessed us all by rubbing a smudge of red dust on our foreheads.

I felt so lucky to have found this guy who was willing to take time out of his day to show us his city. We were also the first few in our whole group of volunteers to receive a blessing like this as well. I felt so accomplished and adventurous. I was totally killing this travel thing.

“uhh..okay.” I said, looking around at my friends. I could see the worry beginning to build. One girl pulled me to the side. “Do you know where we are? Like…can we find our way back?”

“Yeah. We’ve only taken a couple of turns. I can find the way back.” And this was totally true. I had been paying attention and I was confident I could get us back.

…But then there were more turns.
More alleyways.
More empty doorways to more squares.

“I wish you will buy the paintings. They bring good luck. Good for souvenir. Friends and Family” our new friend told me.

So this wasn’t just a kind gesture to show a group of tourists some sights around Kathmandu. Nope. This painting store was likely owned by a friend or relative of our guide and odds were any purchasing we did would land this guy some extra cash in his pocket.

We reached the store and I looked around, careful not to show much interest. I asked if he could just tell us how to get to the Garden.

But at this point, I wasn’t convinced. It had probably been 30-40 minutes since we met this guy and we had been almost everywhere but where we wanted to go.

Another of my friends pulled me aside “I think we should just go back to the guest house. I’m starting not to feel very well.”

Beginning not to feel so sure about this guy, I agreed. I asked if he could just tell us how to get back to our guest house. He took us back to, what I suppose was a main road.
At this point, they all looked the same to us.

We headed off. 10 minutes passed and we still didn’t recognize anything. I stopped to take in the surroundings. I looked ahead and saw that the road we were on turned into a small bridge over a river. I knew for a fact that we had not crossed any rivers on our journey, nor was our guesthouse near any rivers. We were not going the right direction.

We popped into a restaurant in hopes that someone might be able to help us. The owner gladly accepted our map and the card with our guest house name on it. With a pen, he traced from where we were, back up the road we just came down, and turned onto another road. “10-15 minutes” he told us.

And we were off again. Back-tracking our steps and trying to decide whether these small, unmarked roads were the road we were supposed to turn onto. I could feel my new friends getting nervous. Concerned faces and wavering voices offered opinions on which road we should take.
I made a decision.
This road looks bigger, let’s go this way for a bit and see where we end up.

15 minutes passed by. Still nothing familiar.

Now I was starting to get nervous, but I just kept walking- determined to get us back.

Maybe another 5 minutes passed and I stopped. I knew this place. That restaurant name. It’s in English and I remember seeing its bright colors before. Down the hill only 15 yards more, was the entrance to our guest house.

With surging pride and exhaustion, we all entered the courtyard and plopped ourselves onto the plastic lawn chairs. We sat around and laughed about our afternoon adventure. We shared our story with our volunteer coordinator, describing what we had seen. He gave us a confused look and told us he had no idea where we had been.

It was so exhilarating to return back to my room. I was so proud of myself. I had taken an adventurous chance in following our Indian friend. I had seen parts of Kathmandu that others in our volunteer group may never see. I kept my cool while taking on a leadership position in my group of friends, determined to get us through. And we all eventually found our way back, safely.

I learned that perhaps the best way to get to know a city is to get lost, and find your way home. It reminds of a quote I once read, and can now confirm:

“Half the fun of the travel is the aesthetic of lostness.”
– Ray Bradbury

Have you ever been lost in a foreign city? Tell me about it below!

Don’t Want to Quit Your Job to Travel? Then Don’t! Here Are The Benefits of Short Term Travel
October 12, 2018

I love this! I got once lost in China. It was scary but fun at the same time 🙂

I like the picture of you looking out at the road ahead!

What a story. Glad you guys were able to get back safely.

Hahah oh man! So the first thing I thought when I started reading was “you’re using a paper map?” I don’t think I would really know how haha not the big ones at least. Then your story had me at the edge of my seat. I was going to say how nice it was that you guys found this random nice tour guide but then the suspense built and then BOOM there he goes “10 minutes.”

I’m glad you made it make to the safe house okay! I hope the rest of your trip is safe but full of awesome adventures!

Haha. I’m glad you liked it! It’s definitely one of my favorite travel memories.

Interesting story…. Im pretty scary…. I might have freaked out if that was me lol

Oh wow! Getting lost is the best part of traveling but always be safe !! Store important numbers on your phone <3 Travel On!!

I loved your storytelling in this post! Really enjoyable read! 🙂

Great post, Brianna! I really enjoyed your story-telling and writing style. Thanks for sharing 🙂

OMG! How you did it, Don’t you get scared. Even i can’t think about to get lost in other country where i don’t know anybody,

Wow!!.. Getting lost in the trip is not less than any adventure. I also experienced this in India. I was with my friends group and lost into one of the markets of India.

This site uses Akismet to reduce spam. Learn how your comment data is processed.

© Copyright 2017 Archives of Adventure // LetsBlog Theme - Theme by ThemeGoods // View this site's Privacy Policy / Disclosure Policy // We are a participant in the Amazon Services LLC Associates Program, an affiliate advertising program designed to provide a means for us to earn fees by linking to Amazon.com and affiliated sites

You can find out more about which cookies we are using or switch them off in settings.

This website uses cookies so that we can provide you with the best user experience possible. Cookie information is stored in your browser and performs functions such as recognizing you when you return to our website and helping our team to understand which sections of the website you find most interesting and useful.

You can adjust all of your cookie settings by navigating the tabs on the left hand side.

Strictly Necessary Cookie should be enabled at all times so that we can save your preferences for cookie settings.

If you disable this cookie, we will not be able to save your preferences. This means that every time you visit this website you will need to enable or disable cookies again.