How to do Washington D.C. in One Day

In December 2014, two of my best girlfriends and I took a road trip to the capital of the United States: Washington DC. We chose D.C. as our destination for a few reasons:

1.) We had an Australian on board and thought it was a good place to take her.

2.) It was relatively cheap- most museums and attractions are free! Can’t beat that!

3.) I had wanted to visit D.C for quite some time and as the driver and Chief Planner-of-Trips, I got to make the executive decision.

I planned it out so that we’d arrive in DC late in the afternoon on a Saturday night. We’d have a full day on Sunday to explore, then high-tail it back to Michigan on Monday.

If you only have a short time to spend in Washington DC, here’s a great way to see a lot on a limited budget!

The drive took about 10 hours to get to DC from Michigan, avoiding toll roads (Those Pennsylvania Turnpike tolls are no joke $$$). I drove the whole time and as a person with a love/hate relationship with road trips, I should probably get some kind of certificate of achievement…

We parked the car at the Grosvenor Metro Station in North Bethesda, Maryland. From there, we hopped on the train and got off at the Metro Center station in Washington, D.C

Stepping out onto the streets of Washington D.C., I was instantly in love. It had been a few months since my last good city-fix and D.C. quickly filled me back up. The streets were not too filled with traffic and the sidewalks weren’t flooded with people. The lights and architecture kept my head turning in every direction, soaking it all up.

After we checked into our hostel, we joined a free evening walking tour to get a bit of sightseeing squeezed in before our one-day adventure.

In the morning, we were up early- eager to get as much exploring in as possible.

Here’s how it went:

Our first stop was The Smithsonian Museum of Natural History. Now, I’m really not big on museums, but I did enjoy looking at all the animals from different parts of the world. We got to see the famous Hope Diamond, which was supposed to be a big deal but I wasn’t all that impressed. I was expecting a diamond the size of my head, but I guess that isn’t too practical for wearing purposes. My favorite part, though was definitely seeing the Eternal Life of Egypt exhibit. Mummies are an incredibly fascinating part of human history and I was a little geeked out of my mind to see them in real life. Creepy? A bit. But mostly super cool. (Cost = Free!)

After the museum, we walked and ran into the National Archives. It was free. We had time. Why not? We waited in line for probably 5 or so minutes, before going through security. The interior of the building was really pretty, consisting of mostly marble. We made our way up to the second floor to the Rotunda, which houses important documents of United States History. It was cool to be able to see the Constitution and the Declaration of Independence. I was annoyed, however, at the number of people that were stopping to try and actually read these documents. The words are teeny, written in fancy, old-timey script, and very faded. Plus, the text is displayed all around the room, so if you really needed a good read, pick there instead. (Cost = Free!)

Well, after a solid 20 minutes at the National Archives, we were ready to head on to the Capitol Building. After stopping at a truck near the park out front for the Aussie’s first corn-dog experience, we hiked around the building to the underground entrance. We didn’t want to shell out for a tour, nor did we really want more information on the Capitol Building. We were satisfied enough just to say we’d been there and taken photos. (Cost = Free!)

They say its the scaffolding that really makes a place…

We continued walking uphill until we got to the Library of Congress. I was really excited to see the largest library in the world, but what I saw was completely unexpected. It was SO beautiful on the inside. The marble. The gold. The towering columns. The statues. The staircases.  I couldn’t take enough photographs.

I was disappointed to learn that as tourists, we couldn’t go into the actual library floor, but was quickly cheered up when I saw there was a whole section just about maps. As a travel enthusiast, I am completely in love with maps. This one of what they thought Michigan looked like was especially amusing. How about that “Mitten State”, eh? (Cost = Free!)

Next on our list was the Holocaust Museum. I had heard about the museum experience a few years earlier and wanted to experience it myself. Upon arrival, you receive a small booklet with information about the life of someone who had a first-hand experience of the Holocaust. The whole museum is set up like a time line, depicting the horrific events in chronological order. At different points within the timeline, you read more about what was specifically happening in the life of the person in your booklet. It was so much more intimate to read about this person and feel like you were part of their story as you walked through the museum.

It was incredibly moving and I insist you go there.  I do have one request though: The museum itself is powerful enough to make a lasting mark in your memory. You do not need to take photographs inside.
(Cost = Free)

By the time we were done at the Holocaust Museum, it was dark and still raining. We had a choice to make: Go back to the hostel to get out of the rain, or keep on going despite the weather.

We chose the latter.

We headed down towards the river, to make the loop around the Tidal Basin. This walk encompasses a handful of famous memorials (Cost = Free!), including the Jefferson Memorial:

The Roosevelt Memorial, (it was too dark for a good picture of this one) and the Martin Luther King Junior Memorial 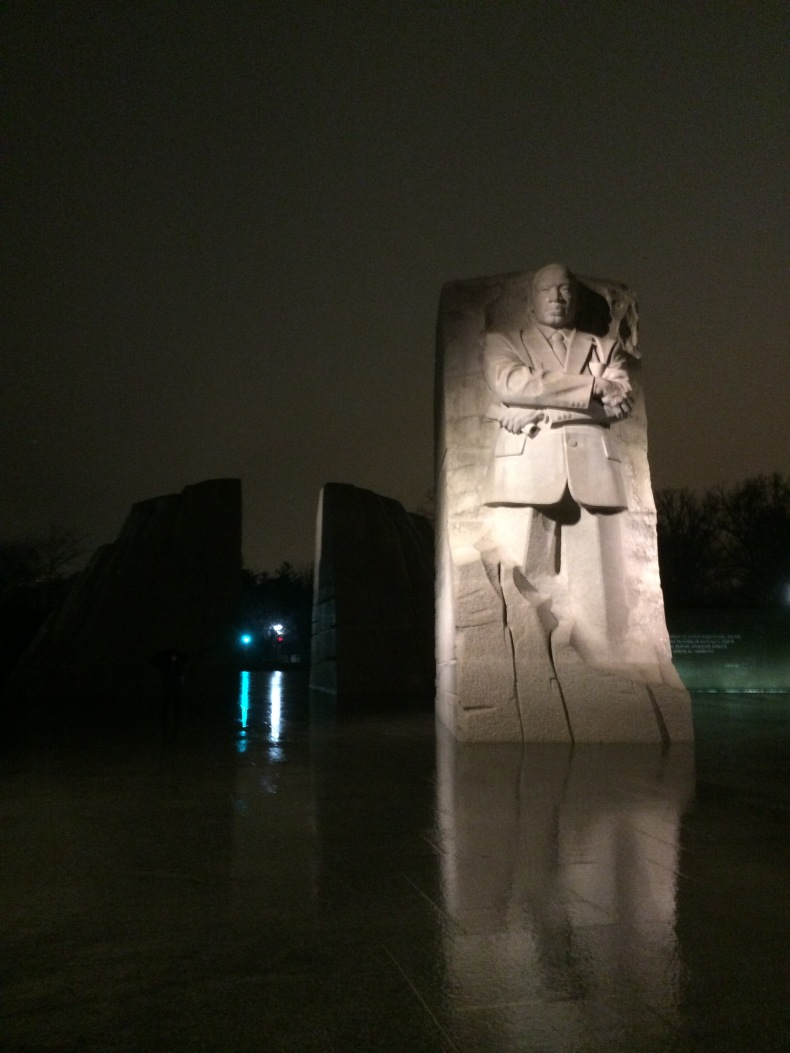 On our way back to the hostel, we stopped by the Washington Monument for a second time. The bight white-grey looked so cool contrasted with the dark and rainy sky. (Cost = Free!) 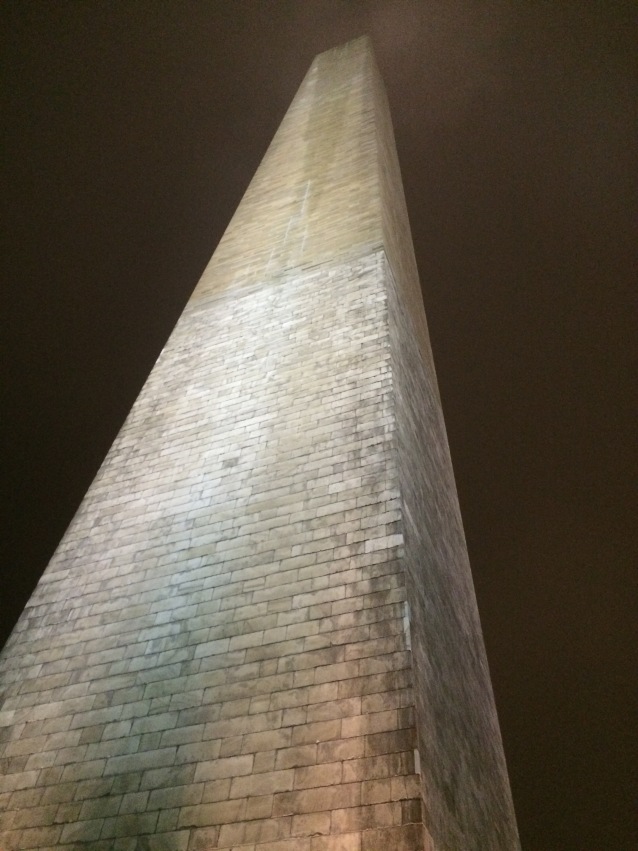 By the end of the day we were exhausted, soaked to the bone, and thoroughly pleased with our day in DC. (Dollars Spent = $0)

Have you been to Washington D.C.? What did I miss during my time there?

3 Days in Washington DC: Things to do for a Budget-Friendly Weekend
July 27, 2019

Don’t Want to Quit Your Job to Travel? Then Don’t! Here Are The Benefits of Short Term Travel
October 12, 2018

This is perfect timing for me as my husband and I are planning a quick trip to D.C. in April. I am really excited for the museums, but the number one on my list is the Holocaust museum. I can imagine it is very moving and will probably agree with the impact it makes on one’s memory.

I am also hoping to catch the cherry blossoms. It looks like you all were able to fit in quite a lot on your trip!

DC is a really fun place to visit! I definitely want to go back and see some more. Enjoy your trip!

Wow, that’s a lot to do in one day! But getting into all those places for free sounds amazing! Is it free for everyone? Or only if you’re under a certain age, are a student, etc.

Free for everyone! There are many other places in DC that have no entrance fee as well.

This is great. We’re taking our kids in April (also driving from MI), so I appreciate the tips and insight.

That’s so nice to be able to have such a fun day and not spent any money! I went to DC a few years ago and really enjoyed seeing all the museums and national monuments!

I would love to visit Washington D.C: one day but I must admit that I had no idea what to see except the White House, haha. Thanks for giving me some ideas 🙂

Eh. Skip the White House. It’s not that great unless you get to go inside. Which you have to arrange far in advance.

Wow what an awesome trip you did in just one day! I so want to go to DC, so thanks for sharing these great tips!!

All the best to you!!
Valerie
Fashion and Travel

Dear Travelers: There is more to the US than California, New York, and Disney World - Archives of Adventure Reply

[…] history began on the East Coast as settlers established the thirteen original colonies. Cities like Washington D.C., Boston, Massachusetts and Philadelphia, Pennsylvania hold a wealth of information and historical […]

Did this exact day trip the last time I was in Washington DC. I wanted to spend more time in the Smithsonian but with so much to see in the city, we only spent a couple of hours there. Will need to go back soon.

I’m not big on museums in the first place, so I was okay with the 1-2 hours we spent. But there are MANY more places in DC I didn’t get to experience, so I’ve got to make another trip soon!

20 Free things to Do in Washington D.C. - Archives of Adventure Reply

[…] DC so much is that it’s actually a super cheap place to visit. My friends and I spent one whole day in DC and only spent money on corn dogs and delicious New York-style […]

I work in DC, and always love reading posts by visitors about the city! You got a lot done in one day, for sure! But next time you’re in town, definitely go into the Capitol building (like everything else, it’s free!). It’s 100% worth it. You can also do a tour of the White House if you plan ahead! And my favorite museum is the Air and Space Museum, it’s so cool!

Great post, thanks for sharing! My friend and I want to arrange a roadtrip for the states. We fly to Boston and rent a car there. After that we plan to visit several cities and Washington is one of the points of our journey. Thank you for telling what you can do and what to see here.

This site uses Akismet to reduce spam. Learn how your comment data is processed.

© Copyright 2017 Archives of Adventure // LetsBlog Theme - Theme by ThemeGoods // View this site's Privacy Policy / Disclosure Policy // We are a participant in the Amazon Services LLC Associates Program, an affiliate advertising program designed to provide a means for us to earn fees by linking to Amazon.com and affiliated sites

You can find out more about which cookies we are using or switch them off in settings.

This website uses cookies so that we can provide you with the best user experience possible. Cookie information is stored in your browser and performs functions such as recognizing you when you return to our website and helping our team to understand which sections of the website you find most interesting and useful.

You can adjust all of your cookie settings by navigating the tabs on the left hand side.

Strictly Necessary Cookie should be enabled at all times so that we can save your preferences for cookie settings.

If you disable this cookie, we will not be able to save your preferences. This means that every time you visit this website you will need to enable or disable cookies again.